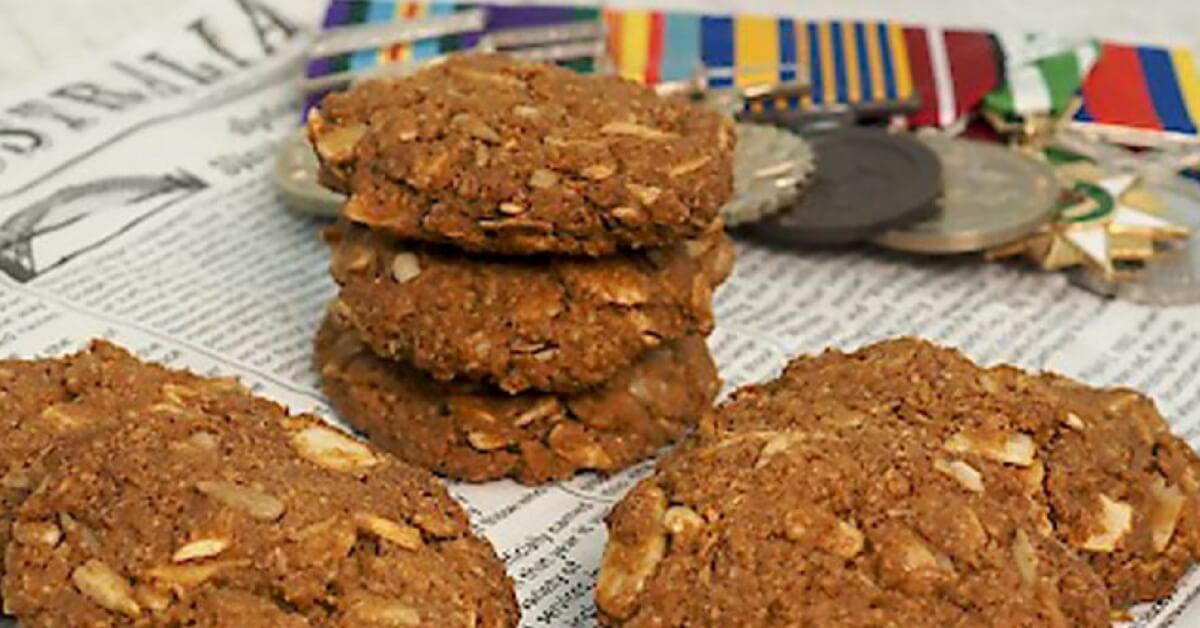 ANZAC biscuits go back to World War 1, when our troops were stationed on the shores of Gallipoli. My grandfather was one of them.

ANZAC tiles or Hardtack biscuits, as they were called then, where part of a soldiers rations with beef bully. They were used as bread, because the ingredients didn’t spoil easily or go mouldy like bread, but were very hard to eat.

The mothers, wives and girlfriends of Australian troops back home got wind of the terrible Anzac tiles and were reportedly concerned their boys were not getting enough nutrients. These women used the recipe for Scottish oatcakes as a base, and developed what we know of today as ‘the ANZAC biscuit’.

ANZAC biscuits were made from a rolled oat base, plain flour, sugar, butter, golden syrup, baking soda and water. The ingredients were accessible during World War 1 and were easy to bake. The biscuits had a long storage life, due to the fact they contained no eggs. After the World War, coconut was added to the recipe, which made them more like the biscuits we know today.

My Own Grandfather’s Story

My grandfather was in the 11th Battalion traveling from Fremantle by ship to Egypt. In Egypt they camped at the foot of the pyramids, training in the sand storms and waiting for orders. The 9th, 10th and 11th Battalions where picked out to do the job of landing at Gallipoli. They were told it was a great honour but to expect that only a few would come out of it.

My grandfather wrote in his diary that the snipers were picking them off as they landed, walking through the deep water with heavy packs on their backs. The dark night helped but many were killed trying to get to shore and climb up the steep cliffs. He was hit; the bullet left a hole in his trousers and a large burn mark on his inner thigh. In his diary he wrote, “it took many weeks to heal”. My grandfather’s diary is published in Ian Gill’s book Fremantle to France 11th Battalion 1914–1919. I’m a proud granddaughter and it was an honour to have him documented.

Down to Business: My Paleo-Friendly Anzac Biscuit Recipe

I’ve made some changes to make my ANZAC biscuits Paleo friendly. They are free of gluten, oats, wheat and refined sugar. I’ve replaced the oats with almond flakes and sunflower seeds, and the flour with almond meal. Highly processed golden syrup has been replaced with unprocessed honey and a little organic molasses; combined they give a very similar flavour.

Add honey, molasses and ghee to a small saucepan. Heat on low–medium, don’t allow to boil.

Add the baking soda and water to a small cup and stir. Pour into the heated honey mixture, stir through and when the mixture froths remove from the heat.

Make a well in the dry ingredients and pour in the frothing honey mixture. Mix well to combine.

Scoop out rounded tablespoons of mixture and press in your hands to make the mixture come together and form a round patty shape approx. 5cm (2ins) in diameter. Place on the prepared trays, gently flattening.

Bake for 20–25 minutes until golden brown. Allow to cool on the trays for 10 minutes while they firm up, then transfer to a wire rack to completely cool. (These are crunchy biscuits, if you find after cooling they are still a little soft underneath, just pop back into the oven for a further 5–6 minutes.

Store in an airtight container.

Article supplied with thanks to The JOYful Table.

About the Author: Susan is author of The JOYful Table cookbook containing gluten & grain free, and Paleo inspired recipes for good health and well being.