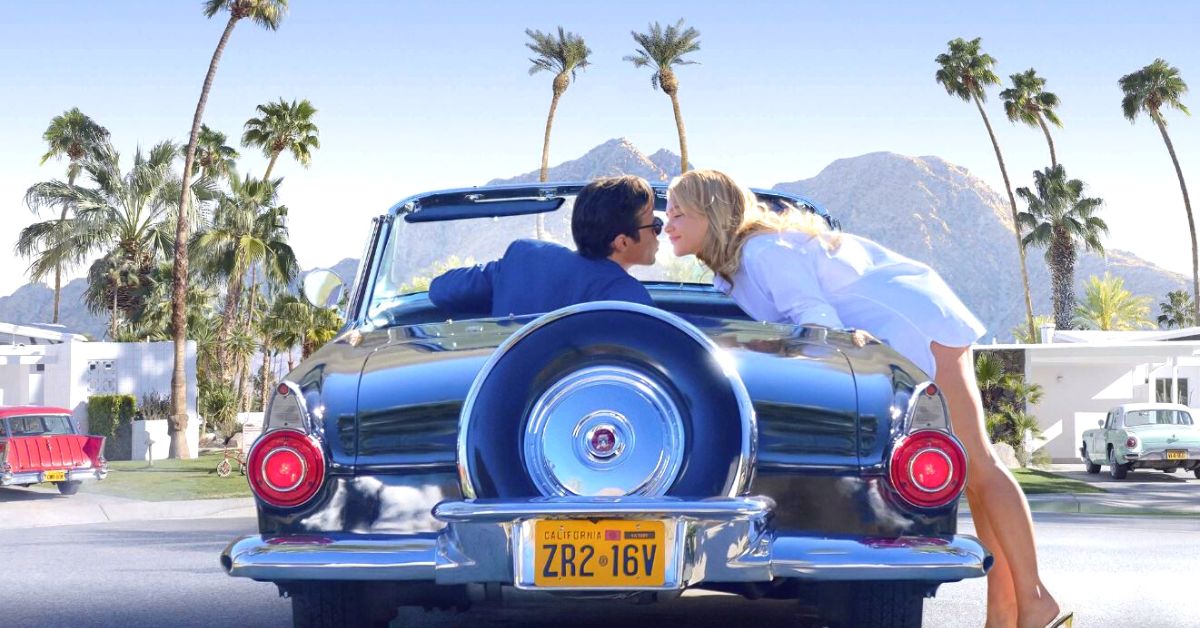 Don’t Worry Darling has been all over the news for all the wrong reasons. The movie seems lost within the noise between suspected on-set infighting, Oliva Wilde and Harry Styles’ relationship, and the infamous ‘Spitgate’ scenario.  Yet, there might be something to discover in this psychological drama that could lift it above all the distracting hype.

Set in the desert of California during the 1950s, the company community of Victory looks to be an oasis amongst the remotely mountainous terrain. Alice (Florence Pugh) and Jack (Harry Styles) Chambers enjoy every aspect of this idyllic lifestyle. Their community has been calculatingly crafted and established by the founder and Jack’s boss, Frank (Chris Pine). Each day has a familiarity associated with the family dramas from the era’s television shows.

The community is set in vibrant colours and pristine conditions where everyone is provided for by the company. That is until the day when one of the wives begins to question this bizarre world where everyone looks to have a perfect life. This is when Alice begins investigating Victory’s purpose and why Frank has such a hold over his employees.

As the press junket continued for the release of Olivia Wilde’s sophomore directorial venture, there may have been a few lessons the director could have learned. One was to keep the romance on the screen, then, more importantly, to allow the film to speak for itself and to keep the polity out of the promotion. Much of the film’s vitriol must have been laid against many of the unfortunate comments made about the film’s purpose.

From the opening scene, there is an awareness that all is not right in this picturesque township, and it is only a matter of time before all is unraveled. The screenplay by Katie Silberman (Booksmart) slowly unpacks the emotionally charged trauma occurring under this majestic society’s surface.

Her story is supported masterfully by Wilde’s vision for this isolated haven that incorporates beautiful colours, pristine homes, and seemingly ideal marriages within each residence. Yet, she manages to methodically unpack the vicious underbelly of the cult-like atmosphere. One that hides more than audiences may have been bargaining for in the end.

More to This Film Than the News Depicts Beyond the poorly managed press tour, this film has more to offer than what is seen on the nightly news. Between the creative writing and outstanding performances by Florence Pugh and Chris Pine, this film had enough to stand on its own. What unfolds is a layering of the narrative that leads to unexpected twists and a stunning central portrayal of a woman trying to break free from her mental prison.

There are some unnecessary scenes within the film that make this accessible to discerning and mature audiences. While under the surface, there are statements that address the potential cults of personality that occur online and the viscous nature of a virtual world that promises utopia. Don’t Worry Darling is a film worth discovering, even though it suffered from more bad press than it may have deserved.

REEL DIALOGUE: Can we trust anyone or anything? Trust. It is a word that is essential for human relations to flourish. The challenge is to know who to trust. Katie Silberman’s screenplay keeps this question at the forefront of everyone’s mind. She shows viewers that we cannot always trust what we see and to pursue the truth at all costs, even when our surroundings seem ideal.

This is an issue that impacts fictional tales and real life, too. It is not hard to realise that most people will fail to find the answers in this area at some point. Yet, what is known of the God of the Bible is that he is the only one who can be trusted. If you are looking for someone to trust, how about picking up the Bible and finding the only genuinely trustworthy being in existence.

About the author: Russ Matthews is a film critic at City Bible Forum and Reel Dialogue. He has a passion for film and sparking spiritual conversations.