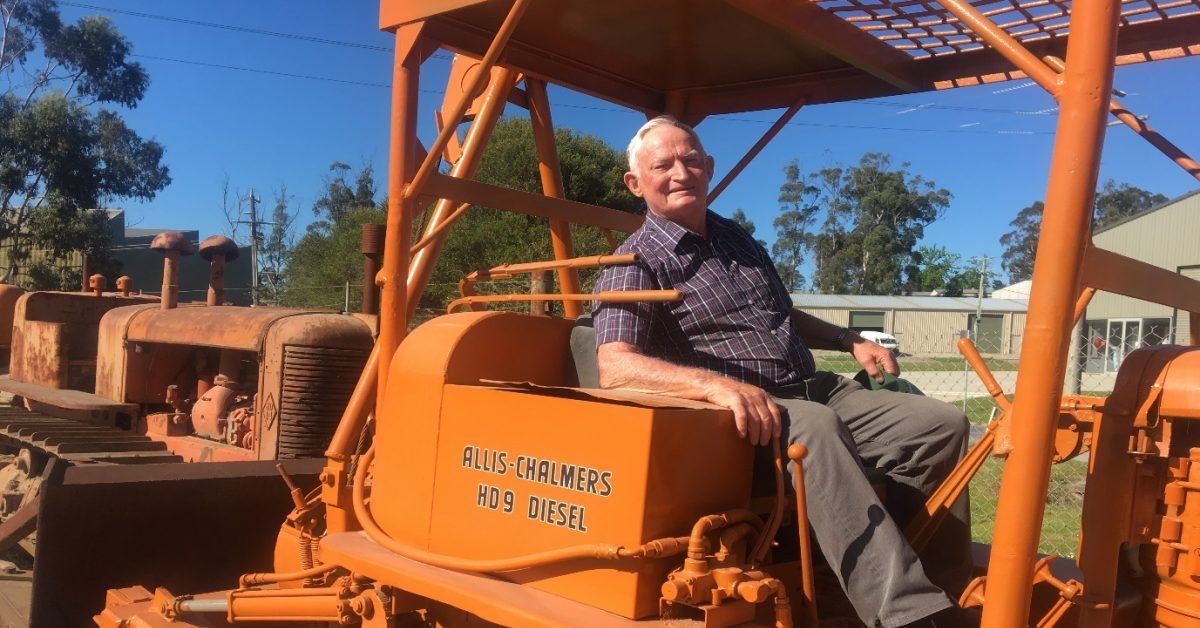 Although George only ever moved 5kms from his birthplace in Jindivick, East Gippsland, his life is characterised by some very big moves. A farmer and earthmover turned world champion cheesemaker, George’s life is synonymous with the breaking of new ground.

As the founder of Jindi Cheese, he broke new ground for Australian cheeses in the 1996 Wisconsin World Champion Cheese Contest taking out Australia’s first Gold medal in these competitions.

The business grew and the gold standard continued until 2005, at which time Jindi Cheese was sold to Menora Foods, who on-sold it three years later to the French company Lactalis; the biggest private dairy company in the world with a $15B turnover and 75,000 employees globally. While Jindi Cheese would face some very serious challenges in 2013 under this new ownership, the story of innovation and excellence that belongs to George Oscar Ronalds will never be diminished.

His story and legacy

Born into a small rural community in 1937 at a time when horses still did all the heavy lifting, George’s passion for earthmoving machinery and mechanics in general was ignited when he was 16 and his father Harold purchased their first tractor. In 1953 tractors were still rare on farms and in the Jindivick district, George’s dad was only the second farmer to have one.

At 17, George and brother Dave bought their first car, a 1928 Chevrolet, and at 21 their first bulldozer; an Allis Chalmers HD9 with a 471 GM motor. George says, ‘it was the Rolls Royce motor of the Day.’ With bush dominating the Jindivick landscape and a lack of needed farmland, George got into the land clearing business converting his great love into a business opportunity. By today’s standards, the size of the jobs he undertook was daunting.

But George was inspired by another big mover; Robert Gilmour Le Tourneau. Le Tourneau was a devoted Christian and generous philanthropist and his contemporaries referred to him as ‘God’s businessman.’ In the 1950-60’s Le Tourneau was producing earth-moving equipment 3-4 times the size of contemporary equipment. This wasn’t because it was the mechanical dinosaur age. With the construction of many new freeways and dams, George maintains it was the sheer size of the jobs in those days that demanded these enormous machines. “The biggest scraper at that time could move 360 yards of dirt. By comparison, the bigger machines today have limited use.  Roads are constructed with dump trucks and excavators, and the biggest power scraper today moves less than 50 yards of dirt.”

Everything about the life and character of George Ronald’s is ‘big’ including what was once referred to as the ‘Protestant work ethic.’ A normal day included early morning milking, some land clearing or dam construction and evening milking, yet George always found time for recreation.

As an expression of his faith, he dedicated 26 years to building life skills, confidence and resilience in the district’s youth as the Director of Warragul Youth for Christ. There was always time to respond with gratitude for his own life and invest in others.

By the time he was 48, George could see a downturn in the clearing business and was on the lookout for another opportunity.  It was long-time friend and retired farmer Alwyn Jensen who advised him, “if I was a young fella today, I would milk cows and make cheese.” He was referring to European style cheeses believing that Australians would get a taste for them. In the early 80’s the only cheese Australian farmers knew about was cheddar. It was completely new ground and a huge risk to mortgage your farm to build a cheese factory when you have no experience at all with cheese and no idea what Brie and Camembert are! But George saw opportunity and being a prayerful and pragmatic man, he got straight onto the job. The rest is history for the man who became locally known as ‘Mr Jindi.’

There were lots of obstacles to overcome but Jindi Cheese became a world champion at finessing soft mould cheeses and ultimately beat the French at their own game. Not only was Jindi awarded World Champion, but in 2002 after all the champion cheese winners from the different categories were lined up, Jindi took out the award of World Champion Cheese becoming the world champion of champions!

The life of George Ronalds is more than a small business success story. It’s about a uniquely Australian family, a man’s faith and friendships. It includes the blokes, the bush, the bravado and the Black Saturday bushfires. It highlights the rewards of passion and perseverance in achieving beyond what could be hoped for or imagined and includes a quote from another biography: ‘The Uncommon Heroism of Theodore Roosevelt.’ This describes how ordinary citizens write the real story of nations and aptly describes the life of George.

With young Australians struggling with what it means to be Australian, perhaps undervaluing the notion of liberty, this biography puts a name to an obscure individual who reflects that brilliance of liberty and the reward of hard work.

The book from which the above story is taken,  George from Jindivick: From Small Town Farmer to Big Cheese can be purchased directly  https://vickiejanson.com.au/pages/books.

About the Author: Vickie is a small business owner, an author and political voice of 10 years who has consistently advocated for core societal freedoms founded in Australia’s Judeo-Christian heritage.Diduno are dedicated to educating and informing the next generation of Australians of our Christian heritage.