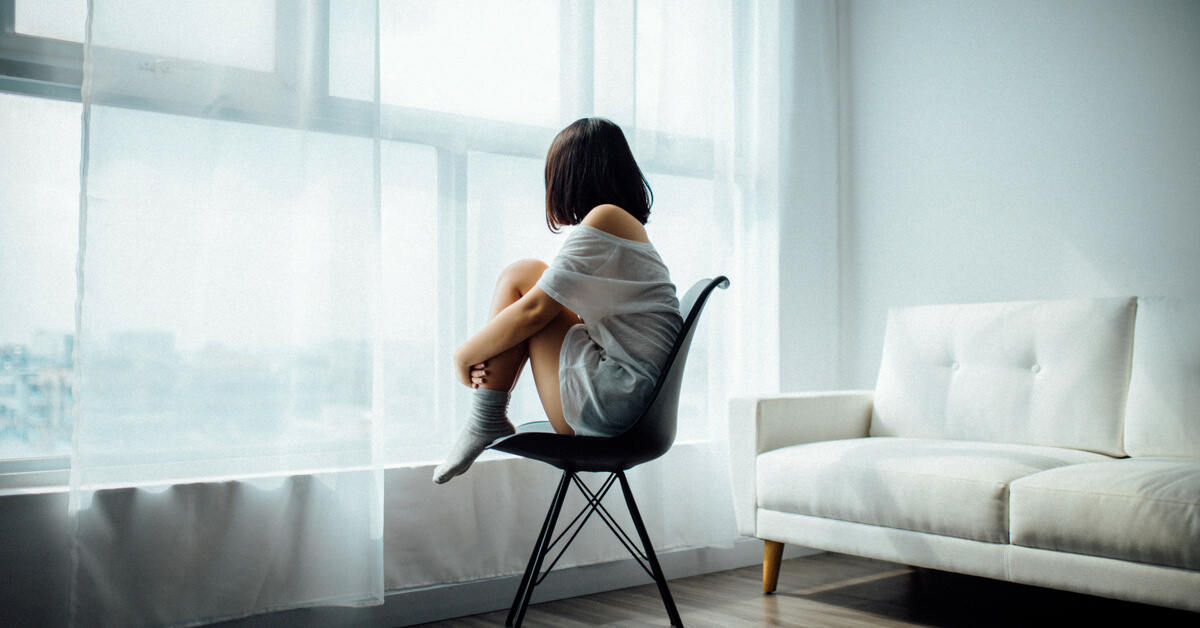 A silent epidemic is sweeping across western societies.

It’s affecting young and old, rich and poor, educated and uneducated. You wouldn’t know it’s happening, because much of it takes place behind closed doors. But increasing numbers of people are touched by it.

What is this silent epidemic?

According to a survey by Lifeline, 60 % of people in Australia regularly feel lonely. And 82% of Aussies feel that loneliness is on the rise. The British government recently appointed a ‘Minister for loneliness’ – a Monty Python-esque title, perhaps, but it shows how serious the issue is.

So why’s this epidemic happening? Here are some thoughts:

The single person household is on the rise.

Australian demographer Bernard Salt writes about the rise of the single person household:

‘The next iteration is playing out in this decade and into the next as singles surge, driven by our individual values, our predisposition to postpone commitment and, most powerfully, the death of male baby boomers in their 70s leaving widowed partners.’

He then goes on to describe the consequences of this demographic shift:

‘And if this is the outlook, then the nature of suburbia [will] shift from a place of energy and activity associated with kids to a place that is stilled by loneliness, isolation and maybe depression.’

It’s an ominous trend, but it shows us the people who are most vulnerable to loneliness: the elderly.

2) The Elderly Are Particularly Vulnerable To Loneliness

‘The sad fact is that I have fewer friends and family than I had. It’s one of the unintended consequences of growing older. You lose people you grew up with and love. All too often you have to attend their funerals…That’s the penalty of out-living the people who count most in your life.’

Loved ones die. And though you might live on, life is relationally poorer – lonelier – than before. You can see this in troubling nursing home statistics: 40% of nursing home residents haven’t had one visitor in the previous 365 days.

But it’s not just the elderly that are at risk of loneliness:

3) Busy-ness Can Lead to Loneliness

Relationships are inconvenient for busy people.

Lifeline Chief Executive Pete Shmigel suggested that our lives had become lonelier as they had become busier, and that loneliness was an unfortunate byproduct of convenience:

‘Relationships, frankly, are inconvenient…Society values convenience so much that we actually seek to make things so convenient that they actively seek to avoid human relationships.’

‘We need to have the stickiness, the gooeyness, the conflict that comes with engaging in actual human relationships.’

I think he’s right. Relationships take time – time that busy people don’t think they have. What’s more, relationships inevitably bring tension and conflict. And it’s all too easy to walk away from relationships when the going gets tough: couples divorce; adult children don’t talk to their parents; siblings don’t see each other for decades.

As a society, we’re rather weak in sticking with relationships when they go south. And when this happens, loneliness increases.

But thankfully we have social media, right? It’s a great way to keep in touch, isn’t it? Well, it’s not that simple:

4) Social Media Is a Mixed Blessing At Best

It allows us to stay in contact with distant loved ones, but it’s a poor substitute for face to face contact.

Social media is a powerful tool for keeping in contact with people, but if it replaces face to face contact, then you’re in trouble.

Because as a recent University of Pittsburgh report on social media use points out,

‘The exposure to “highly idealised representations of peers on social media elicits feelings of envy and the distorted belief that others lead happier, more successful lives.’

In other words, on FB everybody else’s life looks charmed compared to your ordinary existence: they go on the cool holidays; their kids that win all the awards; and they have the fun experiences.

And it’s this continual comparison that may lead some people – particularly younger people – to withdraw socially from real interactions.

Furthermore, we human beings are designed by God to interact with people face to face – not just virtually. Our brains respond differently to seeing people in real life, than endless scrolling feeds. Just as babies need regular human interaction to develop, we too need real human interaction if we’re to flourish.

But social media doesn’t provide that real human interaction. It’s a poor substitute, that can leave you empty, and lonely.

So then, why is all this happening?

Although technologies like social media do shape us (for good or ill), loneliness was already a growing problem before Zuckerberg and his Silicon Valley mates came along.

Many argue that the modern western ideology of individualism is also to blame. At this point it’s worth quoting English journalist George Monbiot, from his article ‘The Age of Loneliness is Killing Us’:

‘Yes, factories have closed, people travel by car instead of buses, use YouTube rather than the cinema. But these shifts alone fail to explain the speed of our social collapse. These structural changes have been accompanied by a life-denying ideology, which enforces and celebrates our social isolation.’

‘The war of every man against every man – competition and individualism, in other words – is the religion of our time…For the most social of creatures, who cannot prosper without love, there is no such thing as society, only heroic individualism. What counts is to win. The rest is collateral damage.’

Individualism may feel good – at least for a while. But ask anyone who’s socially isolated about the impact of every man (and women) for themselves. It’s not good.

So what are the consequences of loneliness?

Well, feeling lonely for one – and that’s bad enough. But prolonged and unwanted loneliness brings with it a host of other issues as well:

6) Loneliness Brings With It a Host of Other Problems

Including both mental and physical health problems.

Loneliness is not good for us.

‘Social isolation is as potent a cause of early death as smoking 15 cigarettes a day; it’s twice as deadly as obesity. Dementia, high blood pressure, alcoholism and accidents – all these, like depression, paranoia, anxiety and suicide, become more prevalent when connections are cut.’

So what’s the solution? Well, it’s not wealth:

7) Is More Wealth the Solution?

No – even wealthy people are affected by loneliness.

You might think that wealth is a cushion against loneliness. But although wealth might protect against some problems, loneliness is not one of them.

A survey by Boston College of people with an average net worth of $78m found that they too were assailed by anxiety, dissatisfaction and loneliness.

Having millions in the bank isn’t enough to protect you against loneliness.

So what are we to do about this epidemic? Here are some thoughts:

‘GDP’ alone will not do.

So many on both sides of politics are fixated by material wealth, as if the main thing a successful society needs is money. The Left talks about material inequality (as if material equality will make for a better society); the Right focuses on individual wealth.

But focusing on material wealth alone misses how vital relationships are to our wellbeing. We need a new lens through which to measure the wellbeing of our society: namely ‘social capital’. After all, statistically speaking, a working class family with strong social capital (e.g. family and relational bonds) will have better mental health and wellbeing than a lonely person in the so-called ‘top 1%’.

But what about addressing loneliness itself?

This is where Christians are at a huge advantage, through our local church community.

9) Churches Are a Potent Force Against Loneliness

Churches are islands of community in a (rising) sea of loneliness.

When living faithfully to God’s word, churches are places where people care, and where people from all walks of life are welcomed. Including those that are most vulnerable to loneliness: the elderly, the disabled (and their carers), and the socially awkward.

I have a rich web of relationships through my local church: a network that many (nay, most) non-Christian friends don’t have.

In fact, I often wonder how non-Christians get by. How does your average non-Christian (many whom live away from their families) cope when the going gets tough? When they need to take a child to hospital? When a spouse falls ill? Or when you just need someone to talk to? I’m sure many get by. But if the stats on loneliness are any indication, many don’t.

But is there more we could be doing for the lonely outside our church communities?

10) When the Gospel Comes With A Housekey

Christian hospitality as an antidote to loneliness.

Even though she was hostile to Christianity, a pastor and his wife welcomed her into their home – and (under God) turned an opponent into a dear friend.

Rosaria encourages Christians to show that same hospitality to the outsider, in her new book, ‘The Gospel Comes with a housekey’. She argues that the purpose of Christian hospitality is “making strangers into neighbours and neighbours into family”.

With a lot of lonely strangers out there – isolated from others, and isolated from God – Rosaria’s call to hospitality is timely. Being hospitable is a key way of loving our lonely neighbours.

(Note: I’ll be interviewing Rosaria about this on a Live Webinar coming up on the 12th July. Find out more HERE.)

Christians have been known to care for the physically poor, but in modern Australian much (although not all) of this has been taken over by the state. Centrelink, Medicare, social housing – the welfare state now looks after many of those in physical poverty.

But what about those who are relationally poor (even if they’re materially well off): who is caring for them?

Even if the Australian government went down the UK route and installed a ‘minister for loneliness’, there’s only so much governments can do.

Might Churches, embedded as we are in our communities, be able to develop ministries aimed at alleviating social poverty? Yes, our church doors are always open: but sadly many of those in social poverty will not come in (nor should we demand they come in before helping them).

I’m sure there are many ways of going about this: from regular community dinners, to play groups (helping isolated mothers); church sponsored social activities that get people out of their isolated homes. I do wonder if this is the sort of ‘mercy ministry’ that churches can tap into, seeing as the need is growing, and very few others are doing it?

(If your church is already involved in this space, I would love to hear about it below in the comments.)

The Ultimate Solution to Loneliness

Society – and in particularly churches – can do much to alleviate loneliness.

But we need to point to the One who’s the ultimate solution to loneliness: ‘Immanuel’ – God with us. No matter how lonely or isolated we might feel, God Himself is with His people, bringing comfort and hope to our darkest nights:

In a world that’s growing ever more lonely, it’s an amazing promise. And one that’ll be fulfilled when Jesus ushers in a world where loneliness will be no more.