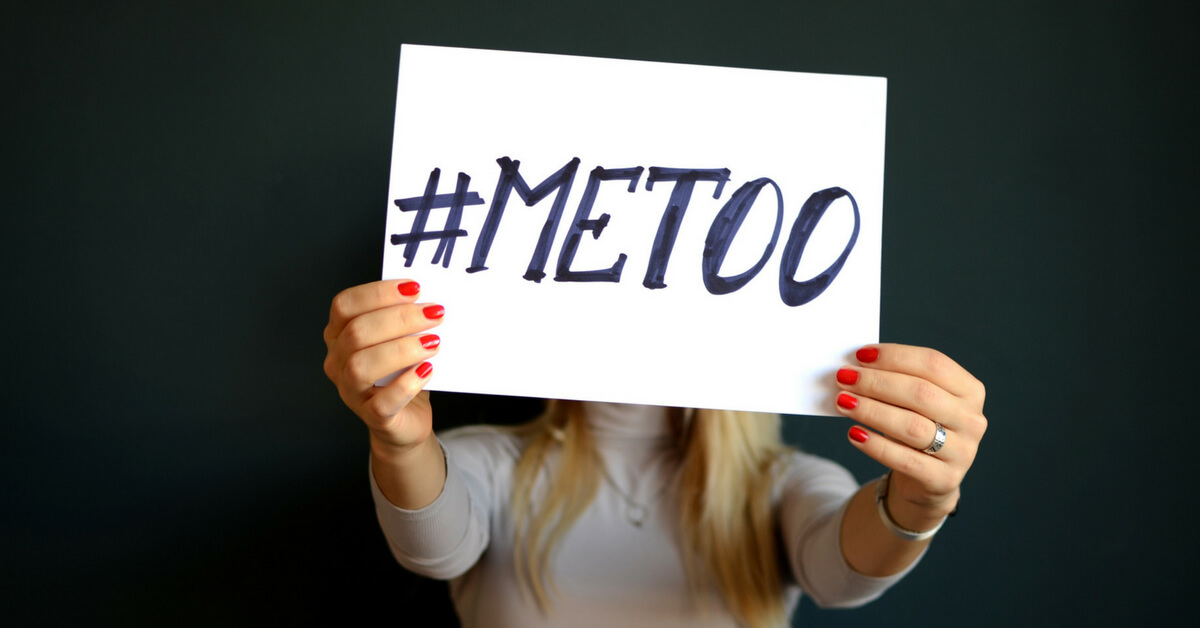 Over recent months, the #metoo hashtag has become a global phenomenon. Women have acknowledged, publicly, the abuse they have suffered at the hands of men, prompted by celebrity actors who allege they were victims of Hollywood executive, Harvey Weinstein.

But I have concerns with the #metoo movement.

Why? Once again we see women as the ones who are owning their victimhood, but where are the men saying #iwaswrong? Why are there not enough men owning up to their inappropriate use of power, their unwanted sexual advances, and their readiness to behave violently towards women? It seems that women are the ones who are forced, consistently, to take responsibility for their abuse. Shame is the only weapon to force heightened accountability. This seems unfair.

And too many men don’t believe that they’re guilty. They don’t see how, in some cases, their coarse comments make women feel uncomfortable – or even violated. They don’t acknowledge and own the way their quick scan of a woman as she enters a room leaves her feeling unsafe, as though she’s dinner for the wolf. Men don’t want to pause and consider whether that hug, or that kiss, was wanted. Or whether it was too long. They remain silent when a woman describes the time she said “not now” and he pestered until she caved.

Let me be clear that I don’t believe all men are responsible. There are many, many good men out there. But I’m not naïve. And I know that many good men have still had a moment or two where they’ve gotten it wrong. Let’s own it, and do more to teach others it’s not ok. Ever. Without women having to make us feel guilty and ashamed. (That’s not their intent, either, by the way. They just want men to stop!)

You see, #metoo maintains the power differential that creates the problem in the first place. Women are passive. Men are aggressive. #Metoo entrenches that power structure even as it exposes it. I’m uncomfortable with this. Because women’s voices aren’t being heard clearly enough yet. Or at least, not by men.

Much of the #metoo social media phenomenon is about adults. Yet too many of the #metoo experiences occurred for young women – often in their teens, and in too many cases, even younger. Given the rates of children harmed in Australia, I suspect if toddlers could tweet, the numbers would be heartbreakingly higher.

Australia is one of the only developed countries where there has been no methodologically rigorous, nationwide study of the prevalence or incidence of child abuse and neglect. Some research gives us insight into how our children are faring, and whether they’ll be part of the #metoo avalanche in years to come.

First, the Australian Bureau of Statistics identified that in 2016 the number of sexual assaults for all people reached an all-time high (based on the years data has been collected and recorded).

Other data shows that over the past decade, reported cases of child sex abuse have increased substantially. The most recent figures from the Australian Institute of Health and Welfare are from 2015-2016 show there were 225,487 Australian children suspected of being harmed or at risk of harm from abuse and/or neglect. (Note, this is not all sexual abuse. Rather, this represents ALL children suspected of being harmed in some way.) The rate of notifications has risen from 33.8 per 1,000 children in 2011-12 to 42.0 per 1,000 in 2015-16. This may be due to several factors: increased awareness of the problem, changes to legislation and reporting, or other policy issues. No matter how we look at it, however, the numbers are going up. It might be a positive now that the behaviour is more likely to be reported (that is, it’s coming out of the dark). It is undeniably a negative because too many children are victims.

In relation to sexual abuse, 12.2% of all notifications were substantiated cases with girls significantly more likely to be abused than boys, and younger children at greater risk than older children. About 90% of abusers know their victims. That is, the kids trust them enough to let them close.

With all of this as a backdrop, how can we prevent our own daughters from becoming #metoo statistics? And how do we help our sons choose integrity over carnal momentum, and a masculine culture that elevates sexual conquest over gentle care and consideration?

In short, how do we keep our kids from becoming a statistic?

“a large number of parents revealed being uncomfortable discussing the subject (74 percent) and not wanting their kids to feel uncomfortable (54 percent). Nearly half (47 percent) feared that talking to children would lead them to lose their innocence. Other parents said broaching the subject never occurred to them (47–65 percent) or thought their children are too young to understand (42–44 percent). In one study, 36 percent of parents said sexual abuse was shameful, and children should not tell anyone.”

We need to start talking with our children about this stuff. It might be uncomfortable… but how much more uncomfortable will it be when our child becomes or creates a #metoo.

2. Teach body awareness from the start

Every child needs to know that his or her body belongs to them. And they need to know what their body parts are called. Use real names, or at the very least, “private parts”. If we’re not comfortable talking about it, how will our children be ok with it? There’s no shame in using the word penis or vagina.

Teach children the underpants rule (sometimes also called the swimwear rule). Help them understand that no one should ever touch them anywhere covered by their underpants. There are some obvious exceptions. Parents will need to help children with washing in the bath when a child is young, but they should ask permission. They should also encourage children to wash their own bodies when they are old enough. Children should also understand that a doctor may need to touch them where their underpants cover, with a parent present for a valid medical reason. Other than that, just no.

If a child asks why, tell them it is because that is their body, and touching people there without permission is called “assault”.

The reverse also applies. Kids should be taught never to touch someone else!

4. Teach them the power of the word “No”

5. Teach them that manners aren’t the most important thing

Here’s a scenario: your daughter goes to a party (aged 8) and is looking for the bathroom. An adult male offers to take her and she accepts his offer. Once in the bathroom he refuses to leave. He attempts to coerce her into an explicit activity. What do you want your daughter to do?

Teach your kids that if someone comes into their personal space, they are allowed to ask them to leave it. If that doesn’t work, manners don’t matter. They should kick, gouge, scratch, scream, smash a vase over their head – whatever it takes! (Obviously we need to be careful as we teach this principle… but we want them to be safe.)

If your child is grabbed, pinched, squeezed, or solicited inappropriately, they need to know they should get out of there right then, however they can.

And for parents of sons, teach them that no one wants to be grabbed, pinched, squeezed, or solicited inappropriately by some random guy, or some friend they thought they could trust. Guys need to learn about consent – which we’ll come to shortly.

Let your children know that when things are dodgy, they’ll often (but not always) get a feeling in their stomach. That feeling matters. It is an indicator that something is wrong and it’s time to get out of there.

7. Be clear on consent

Sons and daughters must understand and live by the idea of consent. This means people must agree to something before it can happen. Young children should understand that no one should touch them without their consent. Older kids need to be even more clear on this. A simple YouTube video about consent can be helpful for young children. This YouTube video comparing consent to drinking tea is outstanding for older primary-school kids.

8. Make sure they know you’ll back them

A woman told me that when she was a girl, she was touched inappropriately by an uncle who was visiting her grandparents’ home. That night, she cried as she told her mum what had happened. Expecting her mum to sympathise and then act to defend her, this woman was horrified and hurt when her mother slapped her, accused her of lying, and demanded she never tell another person such lies. Compare this to the woman who told her dad that his friend had rubbed his hand on the outside of the front of her pants. Her father reassured her that his friend was no longer a friend, and that he would neverbe allowed back in their home.

Reporting abuse takes tremendous courage on the part of our children. Often they will have been threatened. Sometimes the person will be high status. Always, the perpetrator will have more power than the child. Your child should know that you will never blame him or her. They need to know they have your unequivocal support.

I know, I know. No one even wants to talk about this, and now I’m saying we should encourage questions! But our kids need to know we are safe enough to talk to. We need to let them ask – and then respond to their courageous questioning. It takes guts to ask. We need to honour that by responding openly. Then keep your answers simple. Don’t talk abstractly. Be direct and clear. It works best.

In a perfect world, these conversations would not be necessary. In a perfect world, we wouldn’t need to teach people not to be victims or put the responsibility onto them to keep themselves safe. But the world is not perfect. And too many of our kids are either being hurt, or doing the hurting. Sometimes it happens when they’re young. Other times it doesn’t occur until their teens. But it happens too much.

Even with these tips, we’ll never eradicate sexual, emotional, or other abuse. Men will hurt women. Women will hurt men. Adults will hurt kids.

But… these tips will help us and our children be safer. Have the conversation this weekend. Here are some videos that might be useful in your discussion:

For more helpful information, take a look at the books by Jayneen Sanders in our Happy Families Shop.