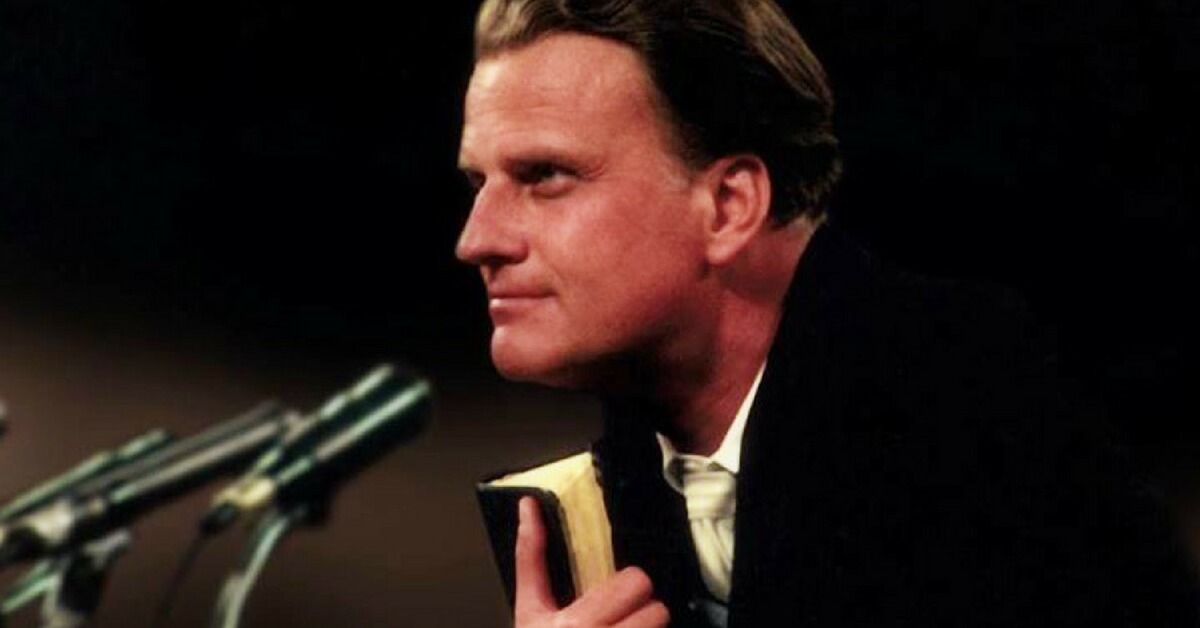 In his 99 years on earth, Billy Graham touched the lives of millions, helped shape evangelical Christian culture, and at the height of his popularity, even lowered crime rates in cities including Sydney and Melbourne.

So it’s no surprise to see the tributes pouring in thick and fast for the American gospel evangelist and author, who died in his North Carolina home on Wednesday (February 21) of natural causes. He had suffered from Parkinson’s Disease.

On TV and social media, thousands are reflecting on his life’s impact, sharing how the charismatic preacher prompted them to turn to faith in Jesus.

Billy Graham was raised in Carolina, made a commitment to faith as a teen, and began preaching when he was still in Bible College. It was a life calling that would never really cease.

He became known for his fiery, emphatic and almost theatrical preaching style, and in an early television interview Graham said, “God has sent me out as a warrior on the five continents to preach the gospel and I must continue until he gives the signal that I’m to stop.”

At a 1949 tent ‘crusade’ in Los Angeles, Graham shot to media fame when his scheduled three-weeks of tent meetings stretched to two months. Hundreds of thousands of Americans kept flocking to hear his mesmerising message. He became a household name.

Graham was driven by Jesus’ instructions to his disciples to ‘Go into all the world and preach the good news to all creation’, and he said that “my one purpose in life is to help people find a personal relationship with God, which I believe comes from knowing Christ.”

To this end Graham spoke to packed stadiums in India, Africa, South America, the Middle East, Europe and the Soviet Union.

When his travels brought him to Australia in 1959, Billy Graham left a big impression. He preached to crowds of up to 150,000 in stadiums like the Melbourne Cricket Ground, the Myer Music Bowl, The Sydney Showground and the SCG. A reported 130,000 people made commitments to Christ as a result of his meetings—almost two percent of the Australian population at the time. Among them were many of Australia’s Christian leaders including former Sydney Anglican Archbishop Peter Jensen, and his brother, Phillip Jensen.

Peter Jensen remembers vividly the impact of the event and said there was beauty in its simplicity.

“Some people might think it was hypnotic or sinister or there was some manipulation going on,” he said. “No, it was pretty ordinary. There were no screens in those days. You weren’t looking at Billy graham on a screen.

“Billy was not only a highly intelligent man but a simple preacher. He brought us back to the Bible.” ~ Peter Jensen

“What struck me was he was preaching the Bible. He preached on Noah and the Ark, warned us of judgment, told us of the need for our sin to be forgiven, told us of the wonderful work Jesus did when he died on the cross, told us we needed a personal faith in the Lord Jesus Christ, and invited us to stand and come down the front to demonstrate our faith.

“Billy was not only a highly intelligent man but a simple preacher. He brought us back to the Bible and told us what the Bible said, simply. About a quarter of the people who went forward were not church goers at all. But many like me were ‘nominal’ Christians. And this made the difference.”

“It brought many new Christians with fire in their bellies.”

Christian commentator Karl Faase writes of the changes in Australian culture around the 1959 crusade, including reduced alcohol consumption, a slowing of the increase in crime, and even an “epidemic” of bad debt repayments in the business world which many link to the Billy Graham-and-Jesus effect.

Graham returned to Australia in 1968 and 1979, still speaking to packed stadiums, but society had shifted and his reach was never quite the same as in the historic 1959 meetings.

“There Was a Remarkable Power of God There”

Reverend Stuart Coulton, the head of Sydney Missionary and Bible College, was at the 1979 crusade and spoke about being captivated by the message.

“He preached with such power,” Stuart recalled. “He was accused of being emotional in the way he preached, but I remember thinking, ‘he’s not emotional, he’s just powerful’ and I think the power came from God… There was a remarkable power of God there. There were lots of people going down the front, being converted.”

Stuart was running a multicultural Bible study at the time and says that he saw a “deep and profound” change in the lives of those in the group who heard Graham preach.

“For a lot of Christians it gave a boldness and clarity,” Coulton said. “I think it helped sharpen believers to thinking about what is the gospel, and what can I be doing to talk about the gospel with friends and be clear about the way I communicate it .

“Australia’s had some remarkable evangelists of its own and I think Billy Graham gave impetus to that as well.”

If you have a Billy Graham memory to share, or want to express your condolences to the family, visit here:

On Facebook, many have written of their ‘crusade’ memories, including Corinne Loomis. She writes of how she naively approached Billy Graham as a nine-year-old at a 1963 crusade in Los Angeles, asking if he would autograph her Bible. He stopped and knelt down to explain that he would love to, but couldn’t, as that would mean he would have to sign 20,000 more—and then asked the little girl’s forgiveness.

A Belief That Jesus was More Powerful Than Politics

Graham was a prolific author writing more than 30 books with titles like Peace With God, Just as I Am, and Hope for the Troubled Heart. He also wrote passionately about his beliefs regarding the ‘end times’, in books like The Jesus Generation and Approaching Hoofbeats: The Four Horsemen of the Apocalypse. He believed that only the return of Jesus, and not politics, would right society’s evils.

The preacher became a friend to US presidents, and at one stage courted controversy by getting too close to Richard Nixon, the president caught up in the Watergate Scandal. After this he steered clear of political stances and stuck to the topic he knew and trusted—Jesus.

His wife Ruth died in 2007 and he leaves behind three daughters, two sons, 19 grandchildren, and 41 great-grandchildren.

Article supplied with thanks to Hope 103.2.

About the Author: Clare Bruce is a digital journalist for Hope Media.