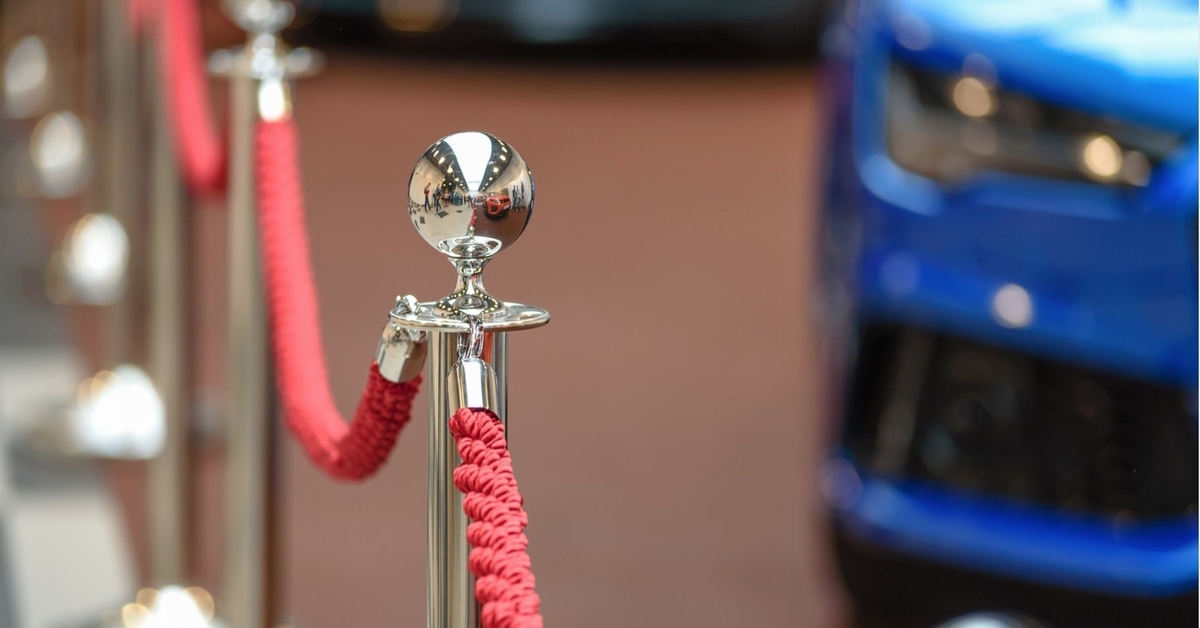 Flying. Remember that? I flew a lot in 2019 for my job, mostly interstate within Australia (which admittedly is a big place), but also some international flights.

And on Virgin flights my seat of choice was 8C. A Goldilocks seat. Not too far forward. Not too far back. Just right. And an aisle seat so that my 53 year old bladder would be quick to the loo.

And close enough to the front that about twenty minutes into the flight, when the seatbelt sign was turned off, I could watch the attendant hook up the red rope across the divide from the business class section. I could watch as the black coated attendant in that section served better drinks, better food and with better utensils than we were getting on the other side of the red rope.

Meanwhile I wrestled a plastic knife and fork out of a stubborn plastic package that was measurably stronger than the cutlery itself, and about as sharp. Not that sharp utensils were necessary anyway. What was I expecting? Steak?

The red rope is there to tell you something. One lot of people on this plane is special. The others? Well not so special. But hey, we made you walk through the special part right at the start to see what you were missing out on!

So the red rope ticked me off. I resented it a little.

Until that is, I’d flown enough miles over the course of the months to get a Virgin Gold Frequent Flyer pass. What did that give me? Why, access to the gold lounge of course!

But also a red rope section at the boarding gate that allowed me and a select few others to board early and settle in. 8C never felt so good! How did I really feel about the red rope? Well it depended which side of it I was on!

In his book, The Authenticity Hoax: How We Get Lost Finding Ourselves, Canadian philosopher Andrew Potter explains how moderns are adept at creating what he calls “sources of distinction” by which we can measure ourselves against others, usually for the better.

He gives a prime example of a diet known as the 100 Mile diet, which prided itself on a lower carbon footprint. All the food you consume could be sourced from within 100 miles. Until someone said “Why 100? Why not 50?” And so it was game on. Who can shrink this down to the smallest distance possible?

The pièce de résistance of course was the Zero Mile Diet in which one man grew everything he needed to eat on the roof of his apartment building. Presumably he was vegan.

An influential bunch of the Corinthian Christians were red rope Christians. As Paul writes to the followers of Jesus in the city of Corinth in his first letter to them, he realises that they are very concerned about which side of the red rope they occupy.

In other words, they had failed to leave behind the ideas and attitudes of their pagan city, even though they had proclaimed to be followers of Jesus. As we discover reading the letter, the desires for “sources of distinction” is not inherently modern. It is all humanity at all times.

The city valued impressiveness, wealth, intellect, status, social mobility and knowledge. They employed an invisible – and often not-so-invisible – red rope in their dealings with other members of the city. It happened in the temples where meals were eaten to celebrate various lords and gods. Everyone had their literal pecking order when it came to the food being dished out.

Which makes a lot of sense of what Paul says in that famous passage that we usually reserve for communion at church, which was actually about the shared meals that Corinthian Christians were having with each other. Remember those words?:

23 For I received from the Lord what I also delivered to you, that the Lord Jesus on the night when he was betrayed took bread, 24 and when he had given thanks, he broke it, and said, “This is my body, which is for[f] you. Do this in remembrance of me.”[g]25 In the same way also he took the cup, after supper, saying, “This cup is the new covenant in my blood. Do this, as often as you drink it, in remembrance of me.” 26 For as often as you eat this bread and drink the cup, you proclaim the Lord’s death until he comes. (1Corinthians 11:23-26)

Paul has just paid out on them for being red rope Christians. Just like pagan Corinth at the lordly suppers in the pagan temples, the Christian Corinthians were making distinctions between the wealthy and the poor, the influential and the non-influential. They were shaming their fellow brothers and sisters for whom Christ died by over-eating while some starved, and getting drunk while others looked on.

Now Paul does not say “share everything in common”. He literally says:

“Take it outside! If you want to eat a lot and drink a lot, do it at home. But when you come together for the one true Lord’s supper, I don’t want to see a red rope!”

And of course it’s not simply about eating. It’s about the failure of the Christians to see that something radical has happened in the cross of Jesus. That the dividing lines and the distinctions between people has been pulled down by the cross. There they were living the values of pagan Corinth – old creation Corinth – when they were supposed to be new creation Corinthians. And Paul is having none of it! In fact God is having none of it. Read on in the chapter and see how dangerous it is to their spiritual and physical health.

The key is verse 26. We often use that verse about proclaiming Jesus’ death until he comes, with the emphasis on the “until he comes” bit. Paul is emphasising “Jesus death”.

Why? Because Jesus – the only person who deserved to be on the one side of the red rope (the good side!), while everyone else would be on the bad side – not only came over to the bad side, not only sat down at the back of the plane, but got thrown off the flight mid-air for us.

It’s no coincidence Jesus was crucified outside the city of Jerusalem, and the writer of Hebrews makes much of it:

For the bodies of those animals whose blood is brought into the holy places by the high priest as a sacrifice for sin are burned outside the camp. 12 So Jesus also suffered outside the gate in order to sanctify the people through his own blood. 13 Therefore let us go to him outside the camp and bear the reproach he endured. 14 For here we have no lasting city, but we seek the city that is to come. (Hebrews 13:11-14)

The proud Corinthians, who still value impressive speech, impressive people, sexual freedom, sources of distinction, lack of repentance and lack of forgiveness, are wrestled back into Christian reality by proclaiming THAT death THAT way, until the day comes when Jesus returns and the red rope is banished forever. On that day we will all be invited up to first class to dine with Jesus, and those at the back will be first in line.

There are a heap of ways to apply this today. But one of the most volatile and ungodly ways Christians are tempted to do red-rope Christianity today is politics. Which side of the rope are you on? The good side (Democrat or progressive if you’re a progressive Democrat), (Republican and conservative if you’re a conservative Republican). I use USA examples here because that seems to set the colour and tone for the rest of the West.

It’s gotten to the point where I am about to go off Facebook for a few months because I do not trust myself to not have a crack at fellow Christians who think differently to me. I can see the tendencies in me that are not healthy, especially when I obsess about politics. You might be stronger than I and hold back that urge, but from the evidence I have seen on my social media, I am not so sure most of us are!

Now there are aspects of progressive politics and aspects of conservative politics that I believe cross the boundaries of either orthodoxy or orthopraxy, but there’s a huge swathe of commonality, and areas we can agree to disagree with, in the middle!

The tribal mentality of the pagan culture has leached into the people of God. We are Corinthian pagan in our desires, even if our Instagram update, our Twitter handle or our good old fashioned church sign says otherwise.

We choose a political side and then judge the people of God according, putting some on the “bad” side of the red rope and some with us on the “good” side. We are enamoured with sources of distinction, and it’s going to tear us apart if we are not careful.

Can I urge you as Christian brothers and sisters in this volatile time (and I urge myself at the same time), to be extremely careful about red rope Christianity, and the way it is outworking in the 21st century?

It has nothing to offer us except the fractured tribalism that the world offers. Do not attempt to paint a Christian pastiche over the top of either progressive politics or conservative politics and call it the pure gospel. Stop congratulating yourselves about how good your side is. Stop the faux commiseration with others of your particular stripe about how bad the other side is.

It’s almost ironic that the political divide is so great in our Western culture that it is quite literally making its way to our meal tables. I’m glad I’m not an American family divided over politics coming into Thanksgiving 2020, that’s for sure. And then there’s Christmas Day just over a month later!

Paul swept all of that red rope nonsense, the sources of distinction by which we measure ourselves against others, with those words: “You proclaim the Lord’s death until he comes.” That doesn’t just mean saying that Jesus died for us, it’s living as if he died for us when we should have died for ourselves. That’s the grace and forgiveness given to us that shatters any pretensions we should have about how much better we are than others.

If we fail to proclaim this in word and deed then what will we have to offer a world that turns up on our doorstep tired out from all of the internecine fighting and pride and unforgiveness? We will have nothing but more of the same anger that is shredding our society at the moment. How will Jesus view this? Harshly I am sure. And sorrowfully.

The red rope has to come down.