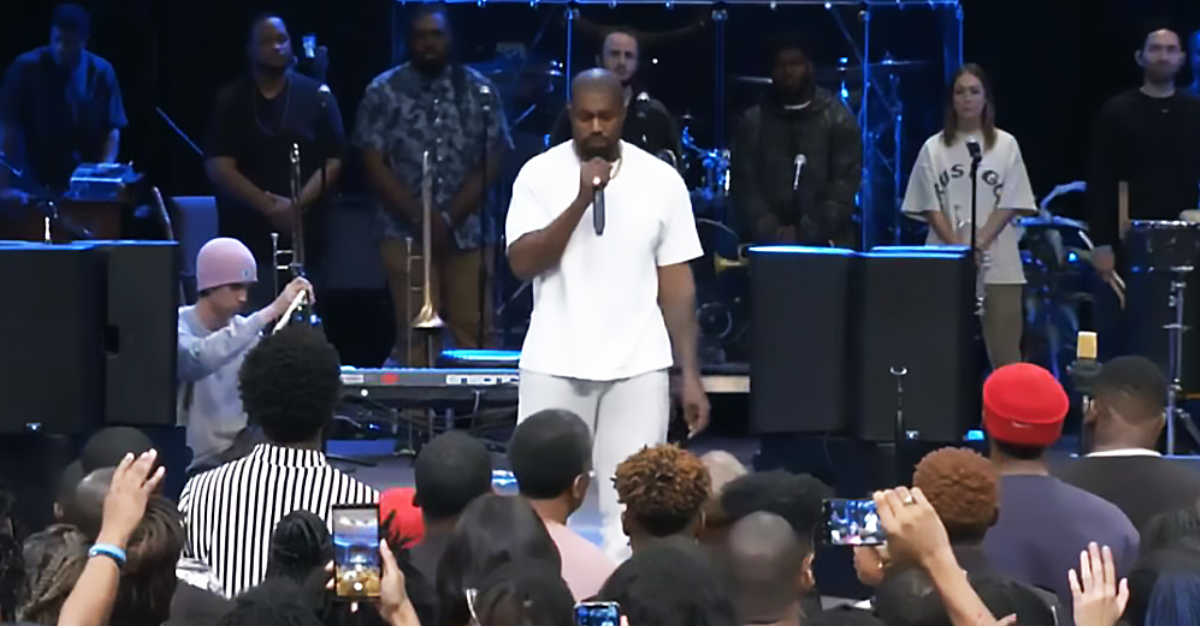 ‘What music do you like listening to?’ asks my martial arts instructor, as we prepare for class. (There’s always some ‘mood music’ in the background as we train).

Truth be told I’m musically illiterate, but I see an opportunity and seize it. ‘Kanye West?” I reply. A little more sheepishly, I say: “I hear he’s got a new album out, called Jesus is King”.

I wasn’t sure how my non-Christian instructor would respond. I was half expecting a laugh, but without missing a beat, he says “Sure. I’ll put it on.”

And so we start warming up with Kanye singing ‘God is King, we the soldiers…’. Alright, this sounds okay…

It’s a title that sums up Kanye’s openness about his faith. While making a surprise appearance on the Jimmy Kimmel comedy show to talk about his new album, Kimmel asks him: “Do you feel born again, Kanye? Would consider yourself to be a Christian music artist right now?” To which Kanye replies: “I’m a Christian everything!”

It’s refreshing to hear a public figure – especially one so famous – being open about their (newfound) faith in Christ. There’s no embarrassment or shame: Kanye is happy to tell the world who his Lord is. The same goes for his famous wife, who said on the talk show The View, “[Kanye] has had this amazing evolution of being born again and being saved by Christ.”

“It’s refreshing to hear a public figure – especially one so famous – being open about their (newfound) faith in Christ.”

Sure, they’re Americans speaking in an American context. ‘God talk’ is more acceptable in the US than it is in other parts of the Anglosphere. But in an age where Christianity has moved from being seen as idiosyncratic, to being seen as harmful for its stance on marriage and human sexuality, it’s interesting to see famous people – especially in the entertainment industry – being positive about Christianity.

Before we get carried away with a cultural icon such as Kanye embracing the faith, there are things we should keep in mind: both the dangers of a megastar such as Kanye confessing Christ, and the potential opportunities this brings.

Let’s start with some of the dangers:

We crave the stamp of celebrity approval.

Let’s be honest: we’re a celebrity driven culture. We value the views and actions of celebrities. They’re the trendsetters. They’re the ones who people want to be like (at least to some degree!).

And so, when a celebrity like Kanye confesses Christ so openly, and (from what I can tell) genuinely, we get a shot of confidence. Not so much because another sinner has turned to the Saviour, but because a celebrity looks favourably on Christ. They approve of Him. Jesus gets their stamp of approval.

And so, we gain confidence as Christians: confidence that if the likes of a celebrity like Kanye confesses Christ, then boy, it really must be a good thing to be a Christian.

Ok, maybe we don’t say it out loud. But don’t we feel it?

If our confidence is in a celebrity’s approval of Christ, rather than the risen Christ Himself, then we’re on spiritually slippery ground.

In fact, He doesn’t even want it.

And yet, it wasn’t because of celebrity endorsement. As the apostle Paul wrote in his letter to the status obsessed Corinthian church:

God doesn’t want (let alone need) celebrities to endorse His Son. That’s the role of the Holy Spirit (see John 16:12-14). God isn’t interested in a person’s worldly status: if anything, He preferences the non-celebrities in His plan of salvation.

Rather, it’s through our godly lives that we show the beauty, truth, and goodness of the gospel.

It’s easy to think that celebrities confessing Christ makes Christianity look good. And so, again we may think that more celebrity conversions are key to the spread of the gospel.

But God doesn’t have “celebrities” as part of His plan to promote the gospel and bring people into His kingdom. Instead, God uses (among other things) our acts of godliness to commend the gospel to non-Christians:

As individuals, we’re to “Live such good lives among the pagans that, though they accuse you of doing wrong, they may see your good deeds and glorify God on the day he visits us.” (1 Peter 2:12)

Or as Jesus says about the corporate acts of believers: “[L]et your light shine before others, that they may see your good deeds and glorify your Father in heaven.” (Matthew 5:16)

It’s the good deeds of God’s people that adorns and commends the gospel, not their celebrity status.

If anything, we should be obsessed with doing good to others, not about getting celebrity approval.

And the watching world is keen to catch them out.

I couldn’t imagine the temptations faced by someone like a Kanye:

There’s a myriad of temptations surrounding him, ready to choke the spiritual life out of him like thorns (Mark 4:18-19).

Not only that, but all taking place under the microscope of a watching world – even a long running reality TV show – obsessed with his every move, tweeting his every misspoken word. Ready to catch him out. And show his Christianity to be hypocritical and empty.

“There’s a myriad of temptations surrounding him, ready to choke the spiritual life out of him like thorns.”

Oh, and if the world and it’s temptations aren’t bad enough, being married to Kim Kardashian couldn’t be easy, either. In a tense exchange on their reality TV show, Kanye asked if his wife would mind dressing more modestly (yes, Kanye did ask that).

Kim’s response? “Just because you’re on this journey [and] transformation, doesn’t mean that I’m in the same spot as you.”

Ouch. That can’t be easy to easy to hear from your own wife.

(When my tween-age daughter heard Kardashian say those words, her response was, “She is so leaving him!”. Time will tell – but (if reality television is anything to go by), Kanye’s conversion has brought new tension into the marriage).

When a celebrity Christians falls due to sin, the shockwaves have great reach across a culture. It can tar the rest of us with the same accusation of hypocrisy.

But sometimes the pressure comes not from the world, but from God’s own people.

6) Christians Sometimes Demand Too Much, Too Soon, From Celebrity Converts

I have no idea whether or not Kanye is a genuine convert to Christ. God alone is the Judge of that.

But let’s assume he is (at least some of his words and actions seem consistent – thus far! – with genuine repentance).

As I look at Kanye I’m tempted to demand too much from him. I’m tempted to demand he become a mature godly believer in quick time. Never mind that he carries a lot of baggage. Or is as broken as any one of us. If he’s going to be in the public eye, I think to myself, he needs to get his act together, and fast!

That’s an ungracious, and indeed ungodly response to fellow brother in Christ. (Not least, because I don’t take into account the enormous pressures and temptations he faces).

And yet, there is good that can come out of a ‘Christian Kanye’.

When famous people like Kanye say and do things, people notice. People listen. People often take seriously what they say. And often become open to believing the same things.

As Psychiatrist and author Glynn Harris points out: “Everybody holds ideas about the world which they haven’t examined or questioned properly. Much of what we believe we take on trust – because others (particularly the kind of people we tend to trust) say so…the term ‘plausibility structures’ [describes] the social processes that encourage us to take ideas on trust.”

Harrison continues: “For example, and idea’s plausibility [i.e. believability] is strengthened when it is heard frequently in the media, or advanced by attractive role models whom we respect.” [1]

And for millions, Kanye West is an ‘attractive role model’. What Kanye says will impact how they think, including about Christianity.

“For millions, Kanye West is an ‘attractive role model’. What Kanye says will impact how they think, including about Christianity.”

Which can potentially be a good thing for the gospel: some of the barriers to faith – such as “only idiots believe in Christianity” – may be removed or lessened (at least for Kanye fans).

Moreover, Kanye’s influence extends beyond his fanbase, out into the entertainment world and into mainstream media. This means that many more people are impacted in some way by his views. Quite possibly, it could mean that being Christian becomes less unacceptable than before.

8) While We May Reserve Judgement on the Genuineness of Kanye’s Conversion, We Can Still Rejoice That Jesus is Being Proclaimed

While we can’t know for sure how genuine Kanye’s conversion is, we can still rejoice that the name of Jesus is being held high, in both word and song (see Phil 1:18). How good is it that millions of people are hearing the gospel through Kanye’s new album? God’s Word is powerful, and it will do its work.

Let’s pray that God do would do His work in Kanye…And in the millions who listen to him.