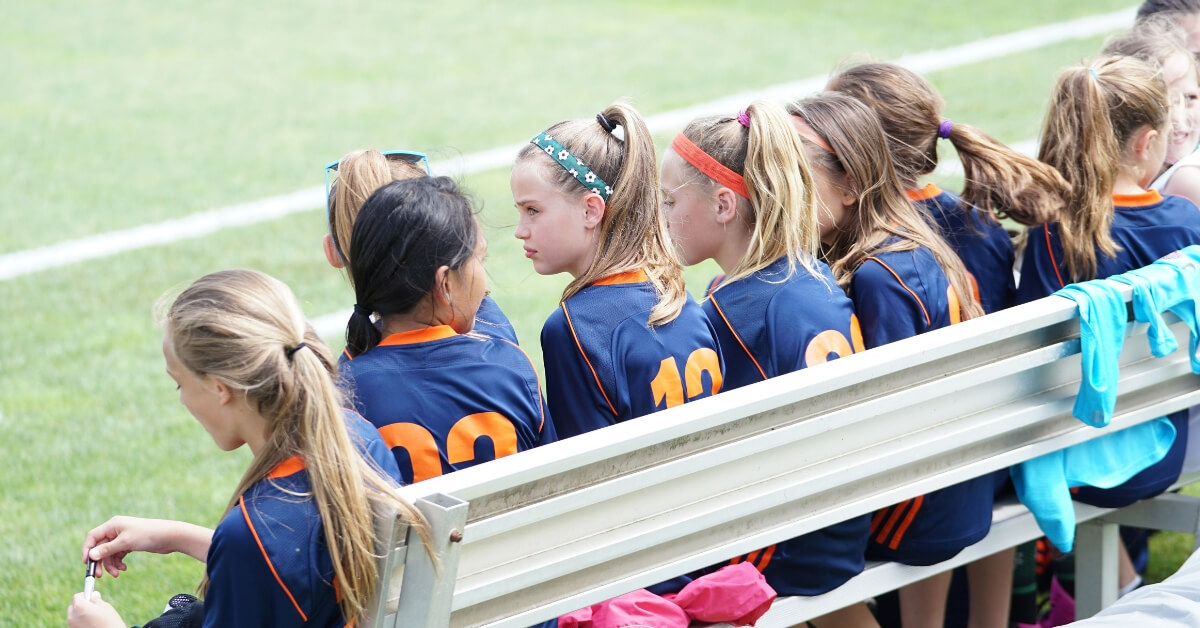 In some circles, junior sport has become a hotbed of competition and comparison. The push to “do your best” starts early. Kids want to win and they put pressure on themselves to beat their competitors. But often there is downward pressure from parents and even coaches (who, let’s face it, are often just enthusiastic parents themselves).

Parents have told me of how their children have been pushed down grades in their netball or soccer teams or have even been pushed out of a club (or sport) because they haven’t measured up, or couldn’t commit to the four, five, or six nights per week practice – at the age of 8!

Other parents explain that their kids have quickly noticed they can’t play or compete nearly as well as the other players and they suffer a lack of confidence. Resilience takes a battering when you can’t keep up. It’s no fun being on the field when you don’t get the ball, can’t hit the ball, or you simply lose, lose, lose.

Then there’s the costs. There is, in too many instances, little on offer for the kids who just want to play for fun and fitness.

How do we, as parents, help our children to feel encouraged and motivated to play sport? Is there a special strategy that will keep resilience high when the going gets tough and they see their loss as a debilitating indictment on their innate athleticism, and give up?

I believe that there is an alternative approach. It’s one that eschews the competitiveness and dog-eat-dog, survival of the fittest approach. It’s an approach that says turning pro shouldn’t be in the conversation for juniors, but having fun, being active, developing relationships, and learning skills should be.

In 2017, Cricket Australia announced that they were changing the rules of cricket for junior sport. For the Under 11’s and Under 13’s the pitch is shorter so there are fewer wides. The field is smaller and the number of players is down (from 11 to 7) so boundaries are easier to hit. Everyone plays wicket-keeper, and bats and bowls in every game. They’ve shortened the game, and… no one gets out! Around ten years ago Tennis Australia introduced Hot Shots. Kids under age 11 play tennis on smaller courts with a lower net than standard, and a low compression ball that doesn’t keep bouncing over their head. More than 380,000 Aussie kids are learning the skills of tennis without worrying about competition, and they love it. (As they get older they can participate in match play, but this is several years in once skills and confidence are built.) Even in the elite pathway, there is a strong emphasis on doubles tennis to foster relationships and teamwork. The proof is in the numbers. There were only 6000 kids playing in 2006. That’s an increase of over 6000%  in ten years.

Some AFL leagues have capped scoring to ensure margins don’t blow out, leaving kids feeling even more despondent when their backsides are kicked. Juniors play on smaller fields in smaller teams. Tackling rules are stricter, grounds are smaller, and fewer players means more kids can touch the ball. The focus is participation and being involved. And recently, more females than ever are playing the game.

The purist might ask “Why would they do this? It’s just not cricket (pardon the pun)!” But the reasons are clear: kids are dropping out of sport when they don’t feel competent, when they don’t have great relationships with others, or when there’s too much pressure. Each of these is related to an over-emphasis on competition at an early age, and various sports are making changes in an aim to change that attrition.

Dr Ian Renshaw, a researcher and lecturer in the school of exercise and nutrition sciences at Queensland University of Technology, is an advisor to Cricket Australia. He explained that with these changes “the kids can actually play the game now. In the first three days of the Australian Primary School Cricket Carnival, 7 balls in every 10 weren’t scored off. These are the best kids in the country at the age of 12. Only one boundary was scored! (It was a 60 metre boundary.)”

If the kids can’t play their favourite sport like adults, perhaps we need to reduce the pressure on them to do that, and make that sport into something they can play.

Cricket Australia’s changes are being piloted right now. So far, Dr Renshaw told me, “in community cricket the kids are playing better. There’s a significant reduction in wides being bowled, more runs being scored, and more wickets are being taken.”

And, as with Tennis Australia,  the results  are pointing in the right direction when it comes to keeping kids in sport and making it fun. 76% of parents agree that their kids are happier playing the game and feel their skills are improving (because they bat longer, bowl more, and succeed at both). 74% of clubs like the shorter games – so it’s also practical. And 89% of coaches say it helps them coach better. Most important of all,  87% of kids enjoy cricket more with the changes. I think they could do more. Here are some significant sporting changes I think would be easy to implement at junior levels, that would make the game even better for kids:

1. Where a team is completely dominating, change the teams up to make the game fairer. This might ruffle a few relationships feathers, but if expectations are explained early and clearly, parents and kids might be more willing to go along. Dr Renshaw described a time where he did that. At half time, his son’s team was decimating the opposition. He spoke to the other coach. They recorded the score as the end result. Then they matched the teams more evenly. “That’s what you do in the backyard. Why not do it on the field?” he told me. “Let’s be less serious. They’re kids.” (The result… a tightly contested second half where everyone left the field smiling.)

2. Get everyone cheering for every child’s successes, regardless of whose team they’re on. The object of the game (at this stage) is to encourage competence and mastery.

3. Design games based on what kids can do. The size of the kids should influence the way the game is played. Maybe use smaller balls (basketball) and courts so they can shoot three-pointers. Pragmatism means we play junior sport on adult facilities. Perhaps new facilities could be designed with kids in mind.

4. Move away from the belief that we have to rigidly coach and teach sport to kids the same way that the adults play it.

5. Keep kids involved as long as possible, and avoid representative teams (where the bigger kids born early in the year get all the advantages.)

6. Recognise that winning under 8’s is NOT the most important thing in the world. Seriously. It’s not.

There are also a few things parents can do to help their kids get more out of their sport.

First up, get away from the focus on winning and encourage fun, improvement, and sportsmanship. Again, at any age this should be the focus. Go play sport. Run around. Have fun. (If they really want to play representative sport, that’s great… but let them choose it when they’re old enough.)

Second, shift the focus from competitive sports. Kids have all kinds of strengths and natural interests. In many cases, individual or team competition will be their thing. But in the early years, simply being outside and developing strengths and talents will be all they need. Third, encourage your children to own their decisions and have some autonomy. Make sure that your children aren’t being forced to play or compete. If they hate it, complain, cry, or resist, ask yourself, “Does this matter more to me than it does to my child?” If the answer is yes, it might be time to rethink.

Fourth, resilience comes from steady successes rather than frequent failures. The more they can feel competent, the more they’ll thrive. Remember, however, that false and undeserved praise will lead to hollow kids. They know when they’re succeeding and when they suck. Give them credit where it’s due and encourage the ‘have-a-go’ approach when they struggle.

Finally, help them to build great relationships. Children (and adults too) gravitate to activities where they have friends. When relationships are strong, children feel positive and want to engage.

This year one of my daughters began playing tennis. We had no idea she was interested in tennis. Netball had always been her thing, until she told us how much fun she had hitting tennis balls with me over Christmas on the court at a holiday park where we had stayed.

Four tennis lessons later and Ella, aged 14, found herself standing at the receiving end of the court one steaming February  Saturday  morning, rallying for points from the baseline as her opponent thrashed her six games to love.

As a teen, Ella doesn’t get to enjoy a non-scoring approach to the game. But on that  Saturday, and every  Saturday  since, Ella heard parents cheering for her. They weren’t just her parents. They were the parents of other competitors who wanted this new girl to feel their support. Ella knew she wasn’t the best on the court – not by a long way, but she was focused on learning, mastery, and development rather than winning. And the girls she has played against have been kind, smiling, and eager to encourage her to keep it up. The games have been played in a spirit of sportsmanship and joyfulness rather than hyper-competitive aggression.

And Ella has been hooked.